So the 40K Radio WWT wrapped up yesterday; 3 games in 1 day. The WCP Club organized the ONLY Canadian event - quite shocked about that. a) They are traditionally a FB club, and b) there are a hell of a lot of clubs across Canada!
Twelve players signed up - mostly locals, but Jeff Everitt made the 5 hour drive from Kelowna on Friday to play.
I took my usual Space Wolves army; Venerable Dreadnought, Wolf Priest, WG battle Leader, 58 Blood Claws, 6 Grey Hunters (bleh), Wolf Scouts and an Exterminator (I'm going to miss that...).

Game 1 (Punch In)
Jeff Everitt! Jeff bought Eldar, pretty much as that was all he had left after his house burnt down earlier this summer...
Well, this should be a fun game - a shooty army, vs an HtH army on what was a jungle table for all intents and purposes! Modified kill points were going to be bad for me - with 3 Hqs vs his one (which happened to be Eldrad) I was theoretically already 6 points behind.
I deployed aggressively, Jeff very defensively. Not much happened in turn 1 (no line of sight!), on turn 2 my scouts came in, and I decided to use them to tie up his best HtH unit, Striking Scorpions, hopefully for a couple of turns. They failed miserably in shooting, and managed to wiff with their power weapons just as spectacularly. They did weather most for the return hits and passed their leadership test.
With lots of dancing around terrain I really did not get to grips with his army; the only exception as when Jeff bought up a unit of fire dragons to take out my Ven Dread. They failed miserably to do anything in shooting, but each having a meltabomb they were able to take it down when I charged. That proved to be the turning point of the game.
Result:
Minor Loss for the Wolves (8 battle points gained)

Game 2 (Lost in the Ustream)
For this scenario I got to play a "new" player - Mark Wakeham, and his Necrons. Necrons seem quite popular in 5e, and they are a pretty solid army. Shame they are tough to get top painting scores on!
This scenario was a simple Capture and Control one, with a twist - you got bonus VPs for teleporting a unit, and a scenario point for doing if EVERY turn!
Predictably Mark castled his forces in one corner and kept the Monolith in reserve. He spent the next 4 turns backing up and shooting me... it was getting a bit boring! I did take out his Destroyer squad, but my Scouts failed to account for the Tomb Spider. Oh, I also tried teleporting a Blood Claws unit (of 12) close to his lines on the first turn. I lost them in a mishap! The Monolith came in turn 3, and by turn 5 had pushed my Grey Hunters off my objective. Not getting into combat until turn 5 really hurt me...
Result:
Major Loss for the Wolves (3 battle points gained)

Game 3 (That's a Wrap)
For this game I drew Adam Sarophim, who I have played MANY times in the past. However, I've never played against his Tau army, which he has been running for the past couple of years.
This was a straight up objectives battle. I won the roll, and let Adam set up. His army was pretty balanced, the only annoying unit was going to be the Sniper Drones. My counter deployment was quite good, but I knew, again, I was going to have to slog it across a killing field...
I managed to take out the Hammerhead quite early in the game, and then it just came down to the slog. Have a couple of units pinned over the first couple of turns was tough to deal with, but a few units got in Adam's face, making them priority targets. Once I did get into combat (turn 4) results were predictable. At the end of turn 5 we were holding two objectives each, with the middle one contested by Adam.
Sadly I did not get a turn 6 (how often have I lost games on turn 7?!). The game was at the tipping point and one more turn would have given it to me - my Exterminator would have wiped one unit off an objective, and a almost full strength Blood Claws unit with Wolf Priest was 8" away from another... I probably could have taken the middle if it had gone to turn 7!
Result:
Tied game - 10 battle points gained.

Summary:
Not my best showing, but still lots of fun! The terrain was a bit sparse/homogeneous for a HtH army.
So my Wolves are now in semi-retirement; once Codex: Flavor-of-the-Month is out next year I'll probably bring them back - in the mean time I'll be adding some Terminators, a Land Raider, and reworking my Blood Claw units to fit the new Codex: Space Wolves out in weeks!
Of course the Exterminator is out of the army (::tears::), but it will find a new home (and new armour/guns!) in my Guard Army. I'll most likely make it a character/command tank.

Thanks to Dan Miner for putting on the event!

I'm off playing games tomorrow!
The local guys at WCP have organized a 40K tournament as part of the 40K Radio World Wide event. Sadly only 11 (yes ELEVEN) groups world-wide managed to organize anything. Quiet disappointing really...
I'll give you an update tomorrow evening (doubt I'll win the $1000 of product prize!), I'm having one last event with the "old" Space Wolves - and in particular my Leman Russ Exterminator.
Posted by Jason Dyer at 9:18 PM 2 comments:

Obviously having a "resolution" is quite motivating! 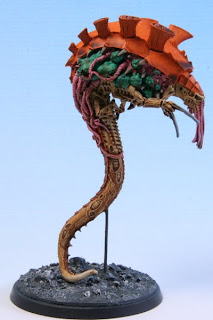 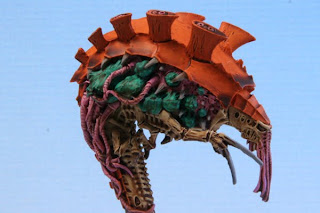 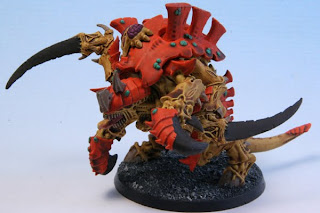 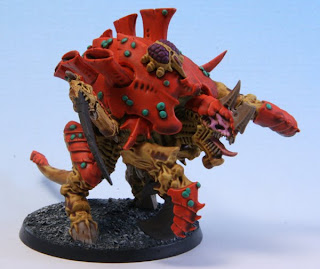 As the more observant among you may have noticed, I've not been posting much recently!

"I, Jason Dyer, of relatively sound body, and completely lacking in a mind, do hereby promise (::cough cough::) that I will complete the following projects, in order, before starting on anything new":